A longboard outside the door points up the breezy surfing vibe at this addition to the surging poke roadshow — an airy Soho spot with a clean Asiatic look and a menu of Hawaiian-style raw fish salad bowls.

Seating is limited, but Honi is just fine for a grab-and-go lunch or an early-evening refresher. With a steamy charcoal grill holding centre-stage and a menu offering a mishmash of Asian creations, Inko Nito is the laidback Japanese fusion restaurant you probably need after negotiating Oxford Circus. The poke bandwagon trundles ever onwards at this serene little South Pacific spot serving raw fish salad bowls on Kingly Street. Great for breakfast, weekend brunch, afternoon tea and general socialising. Smoky thick-ridged grills are built into each table much like Korean BBQ and the fully illustrated medley ranges from USDA kalbi short-rib to excellent pre-marinated spicy pork.

More wrapped-up bliss within striking distance of Oxford Circus, although Le Bab is a proper sit-down affair and its kebabs are decidedly posh. It almost seems a pity to roll them up.

Impossibly juicy meat-and-flatbread combos keep it simple, while assorted tacos play fast and loose with their exotic fillings — we drooled over the soy-cured beef. Delirious puds, meanwhile, are guaranteed to finish you off in double-quick time. Vegans can even order a bespoke eight-piece platter, while other dishes such as tempura aubergine with golden syrup dressing are also worth considering.

Spread over two floors just off Carnaby Street, Ugly Dumpling lives up to its cute, quirky name. Alternatively, pick from the line-up of seafood classics and modern ideas with a pan-Asian twist Korean fried mussels or yellowfin tuna tartare, for example. Cosy vibes, faultless service and terrific food lure the crowds to this modish purveyor of Beirut street food on Winsley Street.

Places to Visit. Map updates are paused. Zoom in to see updated info. Updating Map Best get some to take home for later too though — just to be on the safe side. Silvios on Duke Street is an Italian-inspired sandwich shop, serving panini, foccacia, bagels and pastries, along with salads and coffees — an office worker's haunt, but a decent one. It's one of four branches, the other three being within m of each other near Londonist Towers in Shoreditch our standard lunch order, FYI, is sausage, cheese and bacon panini, custard muffin and a latte.

You might be lucky enough to bag a table, otherwise, take it away.

Don't be put off by the portion sizes at Reynolds Cafe. The sandwiches, wraps and bagels come in smaller sizes than normal, designed for grazers. Rather than getting yourself a sandwich for lunch, get yourself a couple of small rolls Basically, it's the sort of place where it's OK to eat three different lunches, and that's something we can definitely get on board with. There's a decent gluten-free menu too.

It feels a bit off the beaten track, which is sometimes what you need when you've been mooching around the shops all morning. Hot salt beef sandwiches is what The Brass Rail — Selfridges' oldest restaurant — is known for, and you can pick your own meat, bread and sauce to get it just how you like it. Other options include beef hot dogs, chicken noodle soup and chicken schnitzel sandwich. Somewhere to head when you're not absolutely ravenous, but a supermarket sandwich just won't cut it.

If you can face the crowds and chaos of Selfridges, make a beeline for art deco cafe Dolly's and order yourself a full afternoon tea. A range of sandwiches, soft crumbly scones and beautifully decorated cakes and pastries will be served up on the traditional tiered stand, the indulgence of it all letting you forget about the madness outside. English eccentricity awaits on the fifth floor of House of Fraser. The Tea Terrace is a charming restaurant with focus very much on tea and cake breakfast and lunch also available, but if you're here, you're here for the cake. 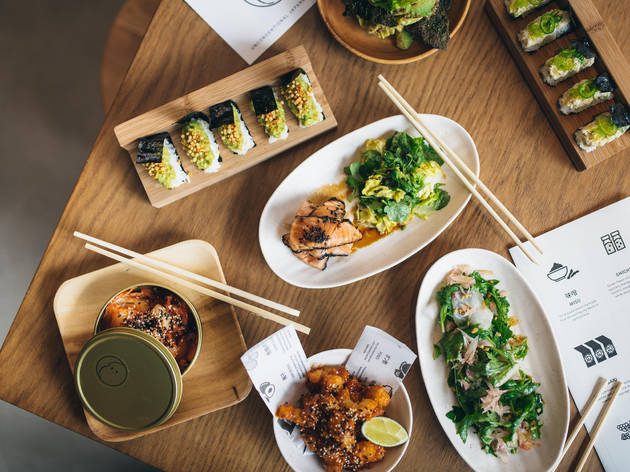 We're particular fans of this afternoon tea because you can select your own sandwich fillings and scone choices from quite an impressive menu. For an extra special experience, have afternoon tea in a Cinderella carriage :. You can't book if you want a regular table, but you have to book in advance for that Cinderella carriage. The tea room is tucked away in the Berkshire Hotel, right behind Disney Store, and options range from a basic high tea to a prosecco or champagne afternoon tea.

If it's a brief, no frills meal you're after, head up James Street to Slim Chickens. The American fried chicken restaurant opened its first UK outpost here in and will satiate your appetite for greasy comfort food. Try out a few of the dips too, to liven things up.

Don't be fooled by the name; The Mayfair Chippy isn't your average fryer. Oysters, mussels and crab also feature, and if fish isn't your thing, British classics such as shepherd's pie and steak and chips are available. Takeaway is an option — if the weather's on your side, head round the corner to Brown Hart Gardens, an elevated public space with plenty of benches. Burgers, shakes, fries, wings and waffles rule the menu at American diner Tinseltown. Slide on into one of those green booths and wait for the American dream to land on the table in front of you.

There's a different offer every day , including Burger Monday and Wings Wednesday. It's open until midnight or 1am depending on the day, serving hot food until 11pm, and those milkshakes after that. Gastropubs are fairly common in London these days, but The Adam and Eve feels a little unique.